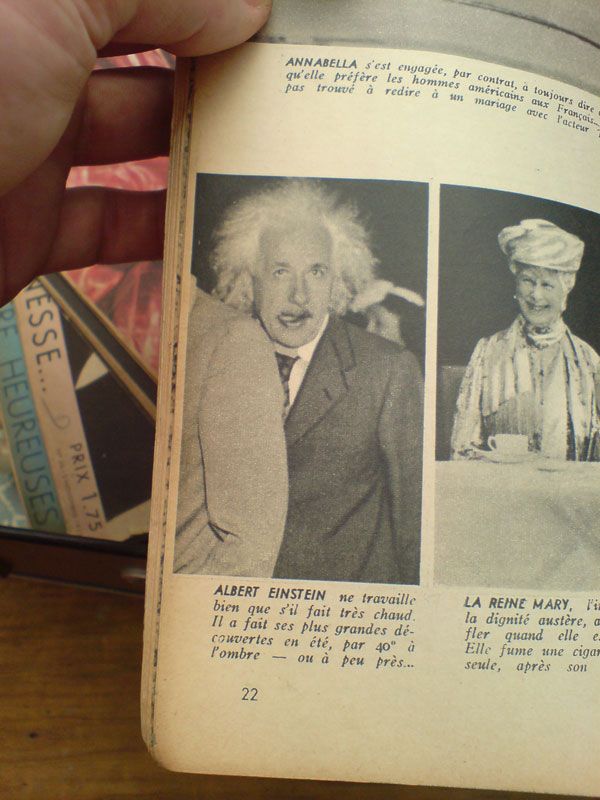 I was in Islington market yesterday when I happened across the June 1939 edition of Marie Claire - in French, naturellement - and found it remarkably familiar. In one fashion special, racy swimwear (exposing nearly the whole leg!) was modelled in faintly awkward poses by attractive young girls and a highly instructive special on interior design advised insecure wives on the home fashions of the day. Chunky, rounded, plastic sunglasses were much in evidence, about twenty-five years before the time I would have said they were invented (much less in vogue) and, perhaps most surprisingly, there was a double page spread devoted to candid celebrity photos. In one, then British Queen Mary (more recently appointed Queen Mum) "smoked a single cigarette after dinner!" while next to her a marvellously wacky-looking physicist eulogised on the weather.

Albert Einstein works at his best when it's scorching hot. He's made all his greatest discoveries in Summer, when it's forty degrees in the shade - give or take...

That last clause is funny because he's a physicist and is all precise with numbers, and that. It's nice to know that this brainless "feature" isn't just a modern invention but I can't decide whether it's a bad thing that we no longer have any genuinely worthwhile celebrities or a good thing that Stephen Hawking isn't trivialised for the entertainment of people who don't really have the faintest clue what boffinery he's up to but still feel the need to know what's going on in the lives of everyone of whose name they're vaguely aware.

Oh no, wait a minute.