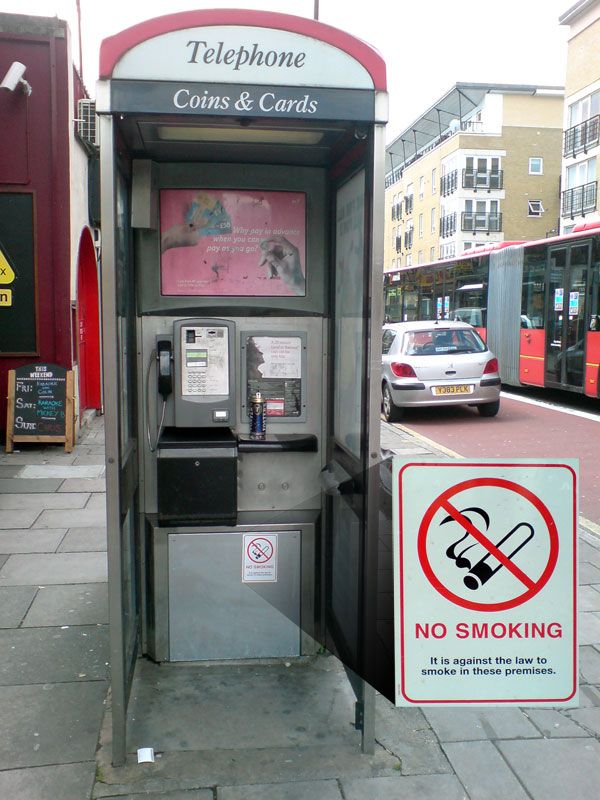 The pictured sticker has been distributed in vast numbers to businesses nationwide to remind any brits who have avoided any and all media for the past six months that they may no longer smoke in a public area not "open on three sides". It's produced a similar effect to handing out Teletubbies stickers to preschoolers, with every cafe, pub and shop in London overexcitedly adorned with at least six. Even Ryman's stationers had one, which really pissed on my fire because if there's one thing I love to do in a shop full of paper, it's bandy about sources of ignition.

I find this fascinating, largely because, like Michael Moore, it's a case of people doing something with which I agree but doing it so cack-handedly that it makes me ashamed to be on their side. When was the last time anybody smoked in a shop? I mean, seriously. I should ring my GP and ask how many he's put up at the surgery. Or maybe the maternity ward have had a resurgence in exciteable cigar-lighting by ecstatic Dads. It's not the seventies any more, you know; the only reason it's a big deal is because pubs are pretty much the only place anyone is allowed - both explicitly and implicitly - to smoke any more. This is it, now; smoking is officially something you only do at home or in your car, along with picking your nose, talking back to the radio and masturbation. But oh, no; we've been given the stickers so we're damn well going to pretend they convey some sort of authority which we are compelled to exercise. Honestly, give anyone a bit of official-looking signage and their IQ drops by sixty percent, dragging their common sense down with it. Like making a twelve year-old girl class Milk Monitor, suddenly half the country are tutting air-Nazis, glaring and disapproving and plastering the city in self-adhesive warnings.

Shortly, my companion spotted that some brave and no doubt altruistically-motivated soul, by the subtle but effective method of tearing off the door, had attempted to adjust this phone box to be sufficiently ventilated for those on particularly stressful calls to suck down a crafty snout. Sadly he had been foiled by the careful placement of a single sticker. Open on three sides, doofus! Next time take the roof off and dig out the floor. Or maybe finish the job you started and smash all the window panes (if that makes it legal, will this trigger a competition between Liverpool and Sunderland to see which is the most smoker-telephonist-friendly city in Europe?*). And next time you see somebody putting up an unnecessary sticker, have them prosecuted for copyright infringement or flyposting or something. Come on, we've effectively outlawed the most popular pastime in Europe; we can silence a few busybodies can't we?

* phrase in parentheses may be up to 90% not my joke

Post Scriptum
Does anyone else find it amusing that an entirely uncontrived and random photo of a phone box on the Essex Road has accidentally included a half-drunk tin of Aussie lager, a CCTV camera and a bendy bus? I swear, it's more representative of modern London than any postcard of facepaint-adorned puppy boobs or some idiot in a Beefeater uniform. Feel free to print it out for postcard use.