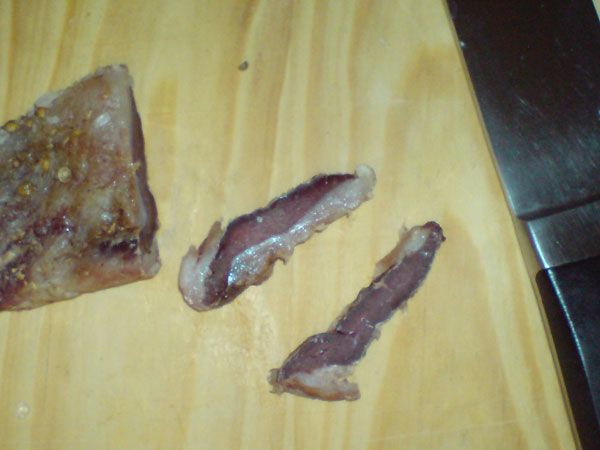 Originally posted in the SomethingAwful forums, this has now been archived so here it is for posterity:

Biltong, as any fule kno, is awesome. It's a South African dried beef snack - somewhat similar to jerky in concept - which is so delicious, so absurdly moreish that it is almost impossible to buy a sufficient quantity for any occasion. Biltong is sold in bars across South Africa because its salty nature makes people drink more. In the UK they give away chips/crisps but Biltong is so addictive, so absurdly desirable, they can get away with charging for it. My Dad once remarked that he couldn't think of a single situation in which he would not like a little sliver of 'billies' and, having attempted to call him out after enormous Christmas dinners, extended vigorous exercise etc I have dicovered that he spoke the truth. I myself have on occasion had my head down the pan, calling God on the great white telephone and wishing I would die before another solid or liquid thing passed my lips in either direction when suddenly the thought of Biltong crossed my mind and miraculously I felt a bit peckish.

In the UK, it's also awesomely expensive, retailing around US$4 for 30g. This, clearly, is bullshit, since it's just cheap beef and some spice. And so it was that when my DIY-keen father asked me what I wanted for Christmas I unhesistatingly told him, "a Biltong drying box."

Well, nothing could have made the old man happier and for the week leading up to Christmas it seemed like every time I rang home I could hear sawing, banging and cursing in the background. But it was all worth it when he saw my little mouth open up and drool spill down the side of his creation, rather like that scene in Bad Taste when Derek unwraps the bazooka. It's a simple enough contraption; a wooden box with rails along the top and a light bulb underneath. There's a drip tray over the bulb to prevent fire and holes in the top and bottom of the side walls to let air through but lined with gauze to keep insects out. Aside from minor personal injury, it can't have cost more than twenty quid or so in materials. Immediately after the festivities ended I got it home and installed it in the shed. I was going to have so much drat Biltong that I'd have a repeat of my gap year, during which I found that horrific stomach cramps and diahorrea were not a result of low-rent African cooking but more the half-kilo of meat I was scoffing down during Days of our Lives every afternoon.

Biltong, I assumed, would be a piece of piss. Salt heavily, press a bit, hang up, wait, eat. And so, much to my delight, it was with the first batch - two cheap steaks from the supermarket. They were a shade on the salty side, producing a tooth-jarring fizz on the tongue more reminiscent of battery acid than suitable accompaniment to beer and good times but, that said, it only lasted an evening before my flatmate and I had polished off the lot. With my father's birthday coming up at the end of January my next move was clear: I had to make the biggest haul of Biltong ever seen on British soil.

I work in a small Cotswold village with an excellent local butcher who was only to happy to sell me half a cow, neatly sliced into thick strips, which I duly processed in pretty much the same way as I had the first lot. I had a week in hand when I hung it up and was rather excited. There was an absolute butt-load of meat in the box and I my days were filled with dreams of the family gleefully rolling on a bed littered with little meaty strips.

Suffice to say, it didn't work out. As those of you with a sensitivity to food perparation may have observed already, there is a danger associated with air-drying raw meat, especially in a damp British winter climate, and after six days half the sticks were dusted with white spores. It looked fine but smelt a bit like dog food. Being a bit macho (and fully committed to my addiction) I decided to risk it but after my girlfriend announced that the very scent made her want to hurl I made the sad, tragic decision to bin the lot.

Appallingly, I managed to waste a second batch also and, heavy hearted and disillusioned I called time on the operation. What put the final nail in it was the electrical inspection of my house which ended with the cable I'd carefully strung along the garden fence being cut and labelled, "UNSAFE" by some jobsworth inspector.

It took the arrival of summer (half-arsed as it is) to put me back in the mood for braais and Biltong. I considered what might have gone wrong and set about doing a fresh batch.

Seriously, before you follow these instructions: You're dealing with raw meat here. I can't accept any responsibility for any mishaps. Use your common sense and for God's sake don't feed this crap to anyone who doesn't understand how it was made.

First of all, I bought a good half kilo of cheap meat. Brisket, being cheap and a little bit fatty, is perfect. By the careful, scientific method of 'slinging some in a bowl' I measured out a suitable amount of coriander and crushed it. The old, familiar scent should hit you at this stage and my resolve was once again tightened - I could already taste it!

Next step is to lay it out in a suitable tray. Turkey basting dishes work for me. Just mix the coriander with rock salt - normal table salt won't work; it just oozes back out for some reason instead of being absorbed properly. Again, it's important to measure the amounts precisely by tossing in a good layer and folding the meat into it as you go. You should be able to see the meat in between the salt but there should still be plenty. Next thing to do is get most of the liquid out by pressing it; supermarket meat especially is wetted to make it look bigger or something so this stage is really important or it'll take a month to dry and go rotten in the meantime. Take a second tray to provide a clean interface and put whatever you have lying around (yes, the meat is under there) on top to provide a pressing action. Leave it for about 24 hours.

The next day, pour off the water. Notice that there's quite a bit here, compare to the pathetic amount I got from the topside steak which went mouldy. I feel this is significant; the denser meat also was never as salty - possibly why it spoiled - which makes sense. Cheap meat for the win! Once you've pulled the somewhat flat pieces out, run them through with patent Biltong hooks to provide a way of hanging them hygenically (ha!) in the box.

Finally, stick them in the box, and leave it a few days in the shed with the light on for about four to five days until it turns black and stiff. For pity's sake, do this in a shed or outhouse, not in your home. I tried it in the basement and had to move it after only 24 hours. It took days to get rid of the smell.

This is not an exciting process except for the anticipation. For the record, this was shot with my old laptop and a Quickcam which isn't advised as it killed the laptop off after three straight days in a damp shed. Sigh. It's actually the second lot that went mouldy so unfortunately I didn't have a crap laptop with which to film this latest lot, worse luck. I am guessing it would have been more dramatic.

Ideally the Biltong should be black on the outside but a little pale in the centre and very slightly flexible. My Dad loves it hard enough to drive nails into concrete but then he is a bit weird like that. The important part is, it should taste salty as hell and should not smell like dog food or make your girlfriend yack. Sigh.

Anyway, it's Biltong time in my house! South African expats in the midlands are welcome to try some in exchange for a pint any time.

Addendum: http://www.biltongbox.com have a whole forum about this, as well as an equipment shop, although Ã‚Â£100 for a box seems a little steep given that you can make one for about twenty quid if you just go to B&Q and get wood, hinges and a light bulb.

I can't guarantee to reply to questions if I'm struck down with severe food poisoning, just so you know.