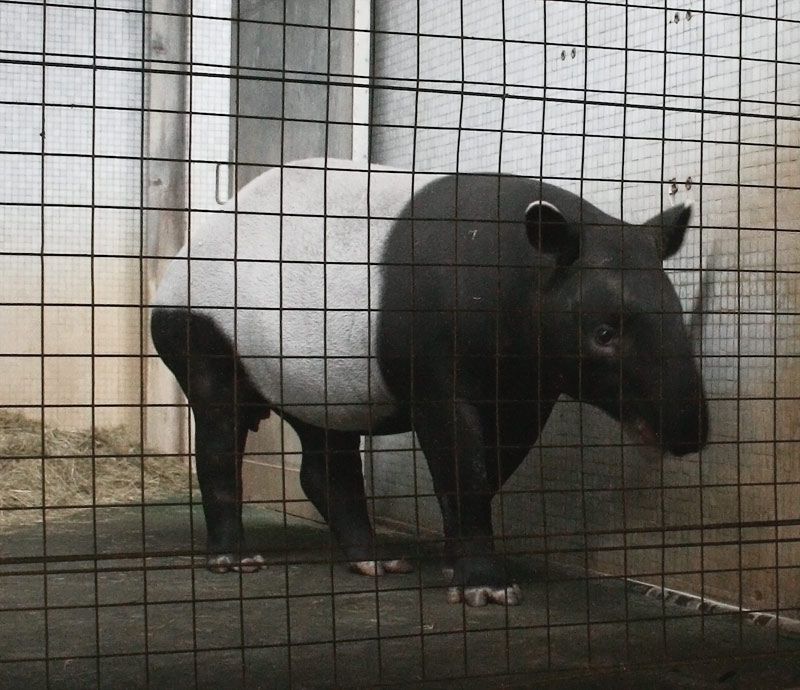 I've had a thing for tapirs ever since seeing a photo of one that was born at the Cotswold Wildlife Park a couple of years back. Impossibly cute with large heads and bright little eyes, young tapirs just cry out for you to give them a huggle and an ice cream.

Anyway, because she is a lovely and thoughtful person, Amy gave me sponsorship of the London Zoo Malayan tapirs for Christmas last year. The certificate took a while to arrive but when it did it included two free tickets so on Sunday we organised to go and visit my tapirs!

I was extremely excited to see my very own tapirs in the flesh but I allowed myself to be distracted by the shitty parrot show (no, seriously; the parrot's party trick is defecating to order from a great height onto a special yellow bench) because it was only on at a specific time but as soon as it was over I hustled my companion over to the tapir pen. It was in that weird part of the zoo that's over the road so you have to dash through a scary underground tunnel full of cave paintings of wooly mammoths. Amy was quite taken with them but I hurried her along - we were on a TAPIR mission and tapir lovers don't give a hoot about extinct hirstute elephants. Of course, when we got there the pen marked on our guide was full of red bearded pigs (or something) and we realised the tapirs been moved since our map had been printed. We searched through the whole area without finding a single keeper to advise us and then, quite suddenly, discovered that we'd mis-read the map and the tapirs were just next to the exit from the tunnel.

The skies were brooding, it was cold and there was a spitting moisture in the air. As any tapir enthusiast will tell you, this is the sort of weather that will see your average tapir indoors with a warm mug of cocoa and a good book so it was hardly surprising we couldn't see them outside. At one end of the pen was the Tapir House, so we hurried over there, cameras in hand.

Inside it was warmer and drier, with nice beds of straw and two rooms from which a discerning tapir might choose. And yet there were no actual occupants in evidence. We waited around a while , wondering if we'd missed a secret room, but it was utterly silent in there so we assumed they'd been moved.

"Probably in Cornwall," said Amy. "For the weekend."

It took the wind out my sails a little bit but there was no sense in wasting the afternoon so we toddled off and enjoyed baby monkeys, swimming penguins, swinging apes and even a few reptiles in an astonishingly hot underground lair. Everywhere we went we found staff ignorant of a reason for the tapirs' departure. We didn't buy the four foot tall stuffed penguin (with hungry baby!) for £100 in the shop but I did get fleeced of about a tenner for a plate of beef stew. Irritatingly, it was rather good stew.

Once I'd scoffed I decided it was ridiculous not to check up on the tapirs one last time. We dashed back across the zoo, through the tunnel, past the empty pen and straight into the Tapir House. Where it was still deathly silent. Curses. We had been told that the houses close fifteen minutes before the zoo does, which only left us ten minutes or so. It seemed illogical but necessary to wait out these ten minutes in silence, awaiting the impossible - a one-tonne mammal to appear out of thin air.

And then, suddenly, a strange noise, reminiscent of an old, toothless man waking up with a hangover.

There was a rustling of hay and suddenly I saw a snout begin to poke round the corner of the room. As you know, nothing is as endearing as a face slowly appearing around a corner and when that face is so long that it takes a full minute to appear the effect is amplified a hundredfold. I found myself in paroxysms of suspense, unable to take a photo or speak. Suddenly the door burst open and a family with a loud child came stomping in.

"SSSH!" I gesticulated wildly. "The tapir has stopped hiding!"

The father (I am told, after the fact) gave me a dirty look but the kid got the message and tiptoed up to the bars just as our Malayan friend bumbled into view. We whispered to one another and pointed gingerly as he stomped around his room, clearly quite enjoying the attention and utterly unconcerned by the noises we'd been making.

Then a gang of Japanese tourists came in, mobiles ringing and flash guns firing. Our tapir friend responded by parading up and down in high spirits and wrinkling his snout at us. He was loving it.

I only took a couple of photos; some genius had lit the bars brighter than the tapir behind so it wasn't until the keepers came in to kick us out and killed all the lights that I managed to grab the half-decent shot above. But it was hardly the point; I'd met my very own tapir and was riding on a high of excitement for the rest of the day.