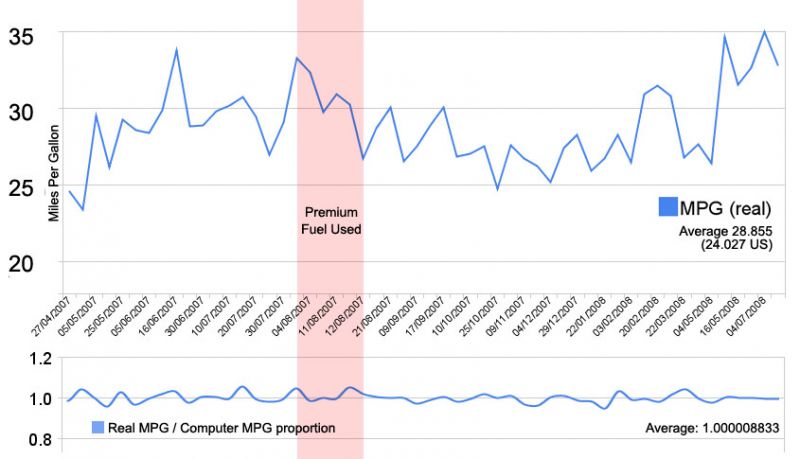 I caught the petrol tracking bug from my dear Aunt; writing down the mileage after every tank is one of life's little information-gathering pleasures. Unfortunately, it's also pointless if you don't do the MPG calculations so finally, after more than a year of ownership, I decided to run the numbers on my Saab.

The first and most obvious trend is the steady climb in MPG since prices started going nuts in the last few months, which makes sense. What is more surprising is the utter, utter lack of any hint of an improvement when I used premium fuel for several tanks last Summer and the way that my recent driving style change (in short, driving under 65mph and maximising motorway time) has made such a massive difference.

It does look a little like there is a dip in fuel economy through the Winter months but the variance between tanks probably means it's not significant. Unfortunately, an aggressive reboot after an "automatic update" ditched the entire spreadsheet while I was making a cup of tea and I really can't be bothered to type it all in again. Blame Microsoft.

Reassuringly, it seems the proportion between the MPG as reported by the onboard computer and the "true" MPG (i.e. the miles I drove divided by the gallons I put in) is so close as to be beyond the accuracy of my fuel measurements ("full") which means I can stop recording this stuff on paper.

Yeah, yeah. Alas, it's like any addiction; once you get in the habit you feel weird driving off the forecourt without making a note in the little book..