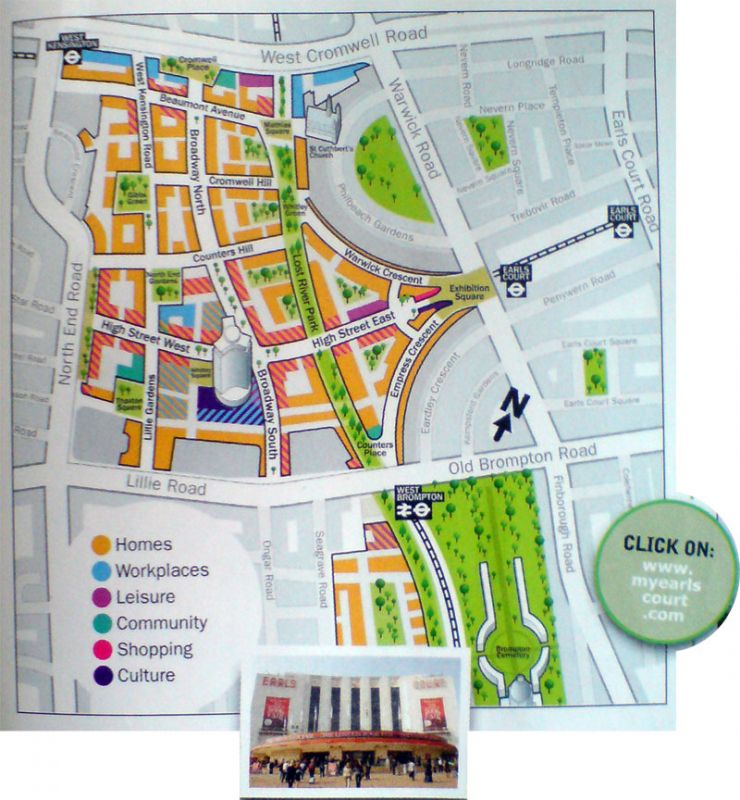 myearlscourt.com proudly states that The Earls Court Project ... could transform an area that’s strategically located near Heathrow at the end of the M4 corridor into a front door to Central London.

Nice marketing copy that. I wonder how they'd describe a proposal to build two giant exhibition centres with easy access from the M4. Vastly more accessible than the ExCel or O2 centres, with, amazingly, ample truck parking just across the road, the Earls Court facility is not one I'd give up lightly.

I know the original building has its faults - Lord knows anyone who's worked there doesn't love the fabric of the thing - but kiling off such an icon of London business had better be bringing some massive advantage to the local area. Yet all the plans seem to show is a large lump of new homes - 7,500 of them - with a scattering of token retail and mysterious "leisure" and "culture" designations which could, frankly, mean anything.

What this really means is that it will be a net consumer of resources in the local area. And it's not an area with much left to give. The North End Road is already one of the most congested in London (ask any cabbie) and that this stretch of the District line is already so overloaded that services to Olympia are being slashed to free up more trains for the main routes.

Just to pick an example, 7,500 homes could reasonably be expected to bring around a thousand high-school age pupils to the area (nationwide in 2010, about 6% of the population were 12-18 years old) so I'm a little surprised to see these plans include precisely one school, for primary age kids.

I admit it's easy for me to whinge as I'm not involved in the process. So what does Hammersmith MP Andy Slaughter have to say in this week's Fulham Chronicle? Ah, here we are: "You cannot ask all these people to move into an area which doesn't have the infrastructure to support them. It's not just education, it's health and transport as well. It is impossible to take these plans seriously." You'll have to take them seriously, mate; they're being sold in your council's newsletter as a done deal.

In fact, local government here is full of enthusiasm for grandiose folly. Equally ridiculous are the plans to close off an entire lane of the Talgarth Road all next Summer so that olympic officials don't have to suffer the indignity of using one of the best public transport systems in the world. That idiocy, however, will last only a few months. This will leave a traffic and public services burden that will blight the area indefinitely.

Still, at least house prices might go up a bit.