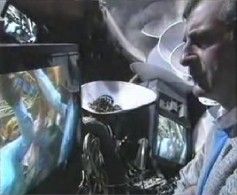 I have been a long standing fan of Douglas Adams so it was a real thrill to happen across this hour-long discussion of the future of communication, penned by Adams in 1991.

It's a touching fifty minutes, capturing very strongly the early 1990s technobabble enthusiasm for cyberspace so bitterly lampooned in The Guy I Almost Was. Back then, it seems, the only people interested in "new media" were university professors, people so far removed from the real world of commerce, of love affairs and even recreation that it's a miracle any of this stuff saw the light of day.

The assertion that an entirely new lexicon had to be devised in advance of the gathering hordes of technological advances - Adams himself questions whether the entire architecture or "grammar" of interactive television might not leave people behind if it advances too quickly - ignores something that was evident even back then: kids push it forwards and they don't care what it's called as long as they can use it. Even within the parameters of this one programme Adams progresses from mock shock at the hectic "synapse sequence" (rapid edit summary of a segment) to hopping from one talking head to another without even waiting for the first to finish.

That's one thing that is bang on the money - the information overload. It's strange how alien it was to see pop up video windows in which the progress bar did not move. I felt a strange impatience, not knowing how long each clip would be and that made me wonder whether I do subconsciously monitor such indicators, constantly debating whether it is worth my time to reach the end. Since the advent of digital, even conventional, non-interactive television now has such progress meters. The irritating rush from one to another, at times exacerbated by visual and even audio cues (the next interviewee coughing impolitely) was strongly reminiscent of browsing YouTube, where the grass of the little icons for related videos begin to look much greener as one approaches the end of the clip one is watching.

There are other guesses that are right. Quite early on somebody mentions video responses to supplied media, something that would have been unthinkable ten years ago but which now makes perfect sense. Moving GIF icons were in there although I was disappointed that Adams not only failed to laugh openly at the idea of coining a whole new word, "micon", for such a tiny advance in icon technology, but failed to notice just how damn irritating they were, even in such a small dose. Identical ones moving in tandem were eerily reminiscent of the garish web design ethic of the late 1990s and I was glad when that part was over.

Adams expresses concern towards the end. "If we spend all our time reinventing ourselves through the computer what's goibng to happen to families and things?" Tom Baker, his deliciously laconic guide, attempts to equate the frankly horrifying vision of a family wearing 3-D goggles with a group around the television. I suppose the latter was a bizarre thought to those in the twenties and to be honest, at least the family are all in one room, rather than rushing about with wireless laptops trying their hardest to avoid one another as in last year's Centrino adverts.

As it closes out we are reminded of the gay naiveté that spawned enthusiasm for this stuff. Adams tries to see what life online is like in 2005 and finds a virtual cityscape filled with hundreds of screens showing identical content. It's as if they genuinely had trouble thinking of enough different things to put on their multi-storey canvas, making the same mistake as V. Bush, the man who thought all the world's knowledge would fit into a library of microfiches. How foolish that they did not predict the avalanche of content, not just old but new, cranked out every day by a million keen teenagers with webcams and disaffected, unsociable middle-aged women who should never have been let near a keyboard.

In a strange way, interactivity hasn't added much. We still have a world of information out there - more than any man can learn in a lifetime - but easier access has, if anything, made us lazier and less prone to learning and awareness. Context is dead because you can always look it up. Hypertext sounds great in theory but in actual fact reading Wikipedia and being able to click on any key concept to learn about it on-the-fly merely means we stop paying attention and, like following a GPS navigator, we allow the web to guide our thoughts along just like the bad old days of linear television. It wouldn't be quite so bad if these journeys were planned carefully by learned people, like the interactive game with which children interact in Adams' documentary. They can click on whatever they want, influencing the flow of events, but all paths have a "happy ending". The problem is, it's not like that; it's chaotic, unqualified, thrown together by those who, through ignorance or even malice, mislead their gullible readers.

They completely ignore, of course, the one thing that has made a success of the Internet and that is basic, person-to-person interaction. From the BBC messageboards to big discussion forums like SomethingAwful to IM systems and simple comment threads, we crave having our say and the feeling of interaction and togetherness that seeing the same usernames every day engenders. Adams seems, in his earnest love for the great Gods of information, to have overlooked this motivation and its importance in shaping the technologies and trends of the 'net.

But whatever the low-key mistakes, it's astonishingly close to the mark and seductively enthusiastic. "Interactivity is a sense in itself," says one contributor. "It brings out whatever is special within the individual and allows them to put part of themself into the story."

Heh. I can think of some stories I'd like to put myself inside.