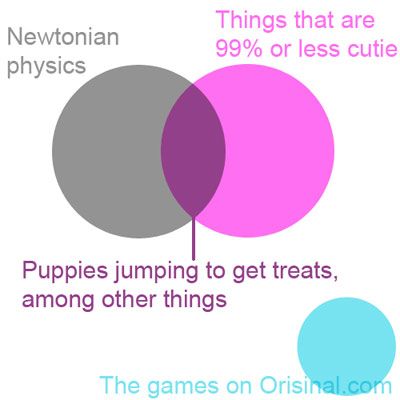 Sometimes you've just spent too long on serious things and what you need is a totally brainless relaxation tool. Well, good old Ferry Halim at Orisinal.com has done it again with Sunny Day Sky, possibly the cutest game ever, on the sweetest website in the world.

To enter Orisinal is to visit a world of soft gradients and small facial features, in which every event - be it collecting a star or a penguin's bellyflop - is accompanied by a sound so delicate and gentle that makes a fairy's kiss seem unnecessarily violent. It's a world where animals are indestructible, little girls are friends with insects and the music always has one more key to climb. The best part of all of this is the fact that the controls of almost every game (and there are precisely sixty of them as of now) are based loosely on basic mechanics - acceleration, attraction, repulsion, tension, leverage and moment and so on - while also disregarding selectively any behaviour that might restrict the sugary-sweet nature of the game. A case in point would be Bubble Bees, a tricky game which involves trapping buzzing bees inside bubbles. Never mind the resultant turbulence inside the bubble, or the effect of wings, stings and hair upon contact with the bubble wall. This game is called Bubble Bees and if that doesn't make you crumple with cutie then realistic physics certainly won't help.

Halim has a similarly ambivalent attitude to danger. While on the one hand an airborne teddy bear may fall hundreds of feet into speeding traffic and merely jog to a halt, a poorly placed falling rock will not just sink a ship but set it on fire. Crushed and burned alive? What's cute about that?! I'll tell you: a few rounds on The Perilous Voyage serves to make you all the more ready for the easy-going charms of duck-corralling on The Pond or airborne bellringing in Winterbells. It's a work of psychological genius.

Orisinal games also have an excellent balance between preposterous premise and pleasing playability. They are exclusively, like all great games (think Tetris), simple to pick up but infinitely more difficult as you improve, consistently testing you harder as your skill increases. And yet, when your twelve-in-a-row run ends ignominiously with a foolish error you cannot rustle up even the faintest flush of frustration. After all, who could get angry with a bouncing baby rabbit who worked so hard to ring those bells for you?

I think what really knocks you out of the park with Orisinal, though, is the pervasive air of melancholy. Very few characters have Ronald McDonald grins and prancing happiness about them; they are more likely to drift about in their task, be it collecting little stars or bouncing on fruit, with more than just a hint of sadness. This is their lot and they must make the most of it. Unless of course you want to give them a hug? Among the clouds has possibly the most upliftingly wistful hero, looking around from the open skies as his hair blows in the breeze and his hot air balloon (despite having no obvious source of heat or propulsion) rises, falls and accelerates according to your whimsical desire. In the mystical land of Orisinal, one need only wish for it, and it is so..

I'm warning you though. Bambi fan or not, The Crossing may in fact make you physically sick with a case of the cuties.